This nine-day three 400-kilometre journey takes the train from the savannahs of the Highveld to the Atlantic in the west. Departing from Pretoria, the first stop is Kimberley, the centre of one of the world’s famous diamond rushes where there is an opportunity to savour the 1870s atmosphere of the mining village. The train traverses the stark vistas of the Northern Cape to the Fish River Canyon – second in size to the Grand Canyon – and Garas Park with its Quiver Tree Forest and the Giant’s Playground. Guests continue across the untamed beauty of the Kalahari Desert to Namibia’s capital for a tour; Windhoek is a lively, cosmopolitan city with a strong German flavour. Then it’s a short flight to Sossusvlei, a stunning pan in the Namib Desert, for an overnight stay followed by night in the game-rich Etosha National Park. On the last morning, the train travels the Namib to the perfectly preserved 19th-century German Hansa town of Swakopmund and Walvis Bay – an unforgettable end to a remarkable journey. 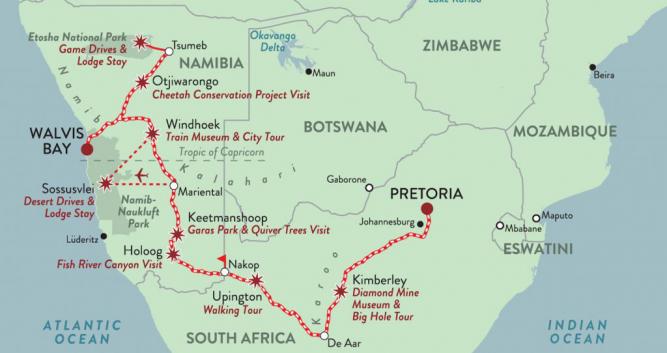 15h00 Depart Rovos Rail Station in Pretoria and travel south towards the goldfields of the Witwatersrand.

12h30 Depart for Upington and travel the Karoo semi-desert.

09h00 Arrive in Windhoek for a city tour.

06h00 Sossusvlei drive with breakfast in the vlei.

12h00 Depart Sossusvlei for a one-hour flight to Windhoek.

09h30 Transfer to a lodge in the Etosha National Park for lunch, game drive and overnight.

13h00 Enjoy lunch on board en route to the Atlantic.

07h00 Enjoy breakfast as the train traverses the Namib.

This journey is available in reverse.

“......just a short note to say that we had a FANTASTIC holiday in Vietnam and Cambodia.