This three-day safari between Pretoria and Durban departs during the summer months. It includes game drives, a battlefield lecture with a world-class historian and a look at unique African ceramics. Experience the Nambiti Conservancy – a Big Five private retreat set on 20 000 acres of malaria-free bushveld in KwaZulu-Natal. It has an incredible biodiversity including savannah, grasslands, thornveld and tall acacia trees. Situated on an expansive game farm, Spionkop Lodge – which adjoins an 11 000-acre nature reserve – is the perfect base for exploring the mountains, bush, birds and battlefields of the region. Ardmore Ceramics is a story about the Zulu people whose sense of rhythm, colour, dance and song, as well as the spirit of the African imagination, is exerting its influence on the other continents of the world. Visit this charming centre in the KwaZulu-Natal Midlands before travelling the Valley of a Thousand Hills to Durban. 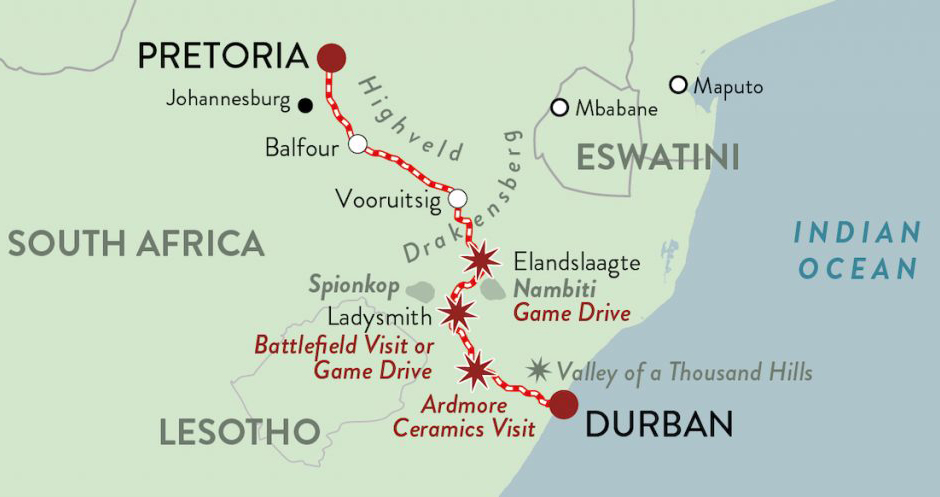 06h00 Wake-up call. Tea, coffee, juices and pastries in the dining car/s before embarking on a game drive in the Nambiti Private Game Reserve. Return to the train for brunch at 11h00 and head for Estcourt.

14h00 Disembark for a 40-minute drive to Spionkop Lodge where a choice of two excursions is available: a lecture about the Spionkop battlefield or a game drive in the Spionkop Game Reserve. Return to the train for dinner.

Breakfast is served as the train descends the escarpment en route to Lions River Station.

12h00 Depart for Durban. The train traverses the spectacular Valley of a Thousand Hills.

This journey is available in reverse.

Just a note to thank you for helping to organise our trip to Borneo.

We had a fantastic time in the Borneo rainforests and at the beach at Langkawi. We were able to switch off and totally relax.